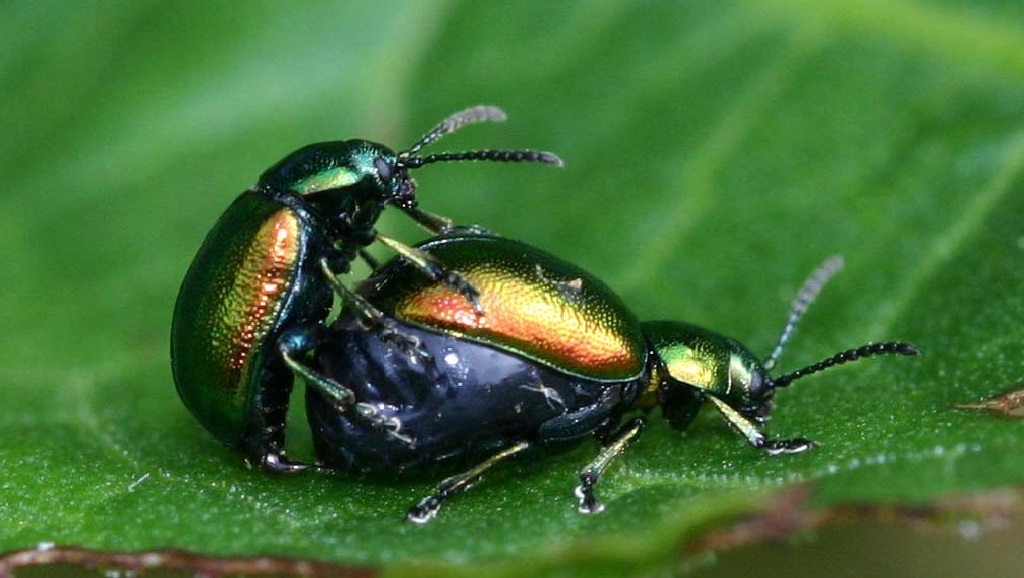 We’ve all got a favourite Beatle, but what about a favourite beetle? The garden is currently teaming with life, including some beetles we love and others not so much.

Not all beetles are born equal in a growers eyes. There are of course the much loved ladybirds but there are plenty of other beetles which do great work in the garden, and some which can wipe out entire crops. The ladybird is famous for eating aphids, which it and its larvae devour in good numbers. But I’ve been discovering some other beetles less famous for their activity in the garden.

The first is this little metallic number, the dock beetle, Gastrophysa viridula. We were so pleased to discover these beetle in its hundreds or thousands on the farm because, as its name suggests it eats docks. We live with the docks to some extent, they have very long roots so bring nutrients up from deep in the soil but they are so successful that if left unchecked they’d cover the whole place in no time. In come the shiny dock beetles, no more than 4mm long and wham down with the docks. Last year the black larvae of these beetles did so much damage to most of our docks that few had the strength to set seed (phewy). We love this beetle!

Next comes one we are trying to be rid of, the click beetle. Not because it’s drab in comparison but because its larvae, known as the wireworm can wreak absolute havoc for growers. The larvae of the click beetle can live up to four years in the soil and during this time feed on roots. Like us they love potatoes, parsnips, carrots, radish, turnips and even the roots of other young veggies. They eat holes and tunnels in them, making them worthless. Click beetles live in grass and new gardens like ours are likely to have lots of wireworms in them. We’ve bought nematodes (miniscule parasitic worms) which we hope will eat our wireworms from the inside! It’s gruesome in the world of growing! 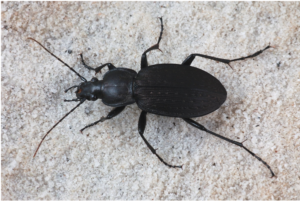 Moving on to another beetle we love, well a whole family actually, ground beetles. These are fairly unshowey beetles, they are small, not that shiny but they do something great. They eat pests. They eat aphids, cabbage fly, carrot fly and most amazingly slugs. We’ve spotted them in good numbers running at superfast speeds across our veg beds, hiding under lumps of compost. It is these beetles, all 350 different species of them which farmers try to encourage with their beetle banks. We have them because we don’t use pesticides and have plenty of ‘wild’ spaces around where they can breed. 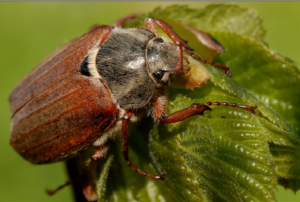 A beetle of the moment is the May beetle or Chafer beetle. They are impressive, almost unnerving when they fly at you. Big, brown and buzzing these beetles were almost wiped out by the use of pesticides but are on the rise again in many places. They are flying at this time of year but their larvae are another pest for the grower.

Chafer grubs as they are known are large and arguably ugly grubs. They feed on plant roots and veg like potatoes for up to 5 years in the soil. But to give these guys the respect they deserve the female Chafer beetle lives for only 7 weeks once it’s finally a beetle and in this time mates and lays her eggs 20cm down in the soil! Not only that but these tiny little squishy grubs can burrow up to 1 metre into the soil! We know that digging this far down is hard, let alone if you’re less than 3cm long! We respect these guys but don’t want to see them around too much!

So do keep an eye out for beetles this spring and let us know your favourites.