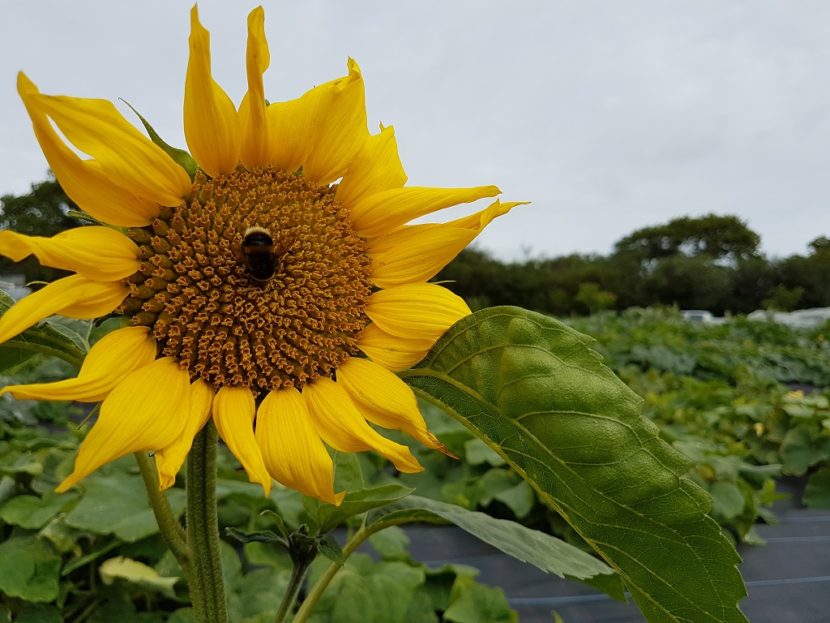 Yesterday I saw a baby grass snake on our compost pile. I beamed with joy and awe at this amazing creature and the first thing I thought was “yet another reason I love being organic”.

Like hundreds of other growers and farmers in the UK and amongst thousands across the world and millions in the history of human life on earth we produce food organically. We aren’t certified organic (more on that next time) but we are proud to have a good grasp of organic methods and to put them in use in our market garden. Here is why we love being organic.

At the foundation of any type of agriculture worthy of the name is a humble appreciation of the wonderous thing that is soil. The Organic movement has its roots in remembering soil as the foundation of all food production. For us organic growers nurturing the soil to be resilient, full of life, naturally high in nutrients, and with good structure is what it’s all about. People often think of organic as being about not doing things: not spraying herbicides, pesticides, not using artificial fertilisers. And those things are true. Artificial fertilisers are made using finite resources in industrial process which use lots of fossil fuels and are easily lost from the soil with a bit of rain. We don’t think that’s at all sensible so we don’t do it.

We don’t just expect that the soil will sort itself out between us cropping it though. We actively nurture and care for our soil, feed it with organic matter that supports good structure, fungal life, moisture holding capacity and of course high fertility. We do this in a range of ways. The main one being the addition of composted plant matter and animal manure. These are both high in nutrients and organic matter. Another way we do it is with green manures – growing plants which get mulched back into the soil to increase soil matter and fertility. We don’t plough or leave the soil bare in winter, we don’t compact it with machinery and we don’t spray it to kill soil life. We love it and respect it is the source of life.

The quality of organic food better than non-organic. A well-known factor is that it hasn’t been exposed to pesticides, or herbicides, it doesn’t contain genetically modified or other man-made substances which are harmful to life! Phew, should the other stuff even be considered food? Organic production refuses to use harmful substances, it’s as simple as that. It’s a principle which is more important than economics, we won’t poison you. Full stop.

But more than that, organic producers have to be smarter than their non-organic counterparts. We seek out varieties which are resilient, which are more flavoursome, which are able to make good use of organic soils. These superior varieties produce superior veg. At the Real Food Garden we often reject varieties of veggies which ‘bulk up’ quickly, selecting instead those which grow more slowly, putting down a better root system, soaking up nutrients and filling with flavour and character. So we may have less yellow courgettes than if we grew only the fast maturing green ones but we know the flavour is better on the golden beauties.  It really is quality over quantity when it comes to what we put in our bodies.

Studies have found organic food to be higher in nutrients than non-organic food. This is hardly surprising as the nutrients in organic soils is higher and more stable, able to impart that goodness to the veg or grass that livestock feed on. We are very proud to produce food which is truly nourishing to our customers. It doesn’t just fill a hole or look good on a plate, it puts all the best things into our bodies so that we can thrive too. We see no reason to eat food that does anything else but feed us. We would also like to suggest that more people seek out organic food from small producers like us who nurture the soil with such care and attention. Large scale organic is great but something can get lost in the huge scale, in answering to shareholders. If we want nourishing food then small organic production is the way to get it.

It might seem quite simple that on organic holdings no herbicides are used so there is lots of plant diversity. And it is almost as simple as that. Yes us organic growers spend time and effort keeping unwanted wild plants at bay. We don’t wake up each morning hoping to see the garden full of dandelions or docks. But by selective weeding and a keen eye for plants we have created a space where wild orchids, knapweed, clover, trefoil, bluebells and more thrive. More than this, we engage purposefully in creating edges which are diverse in their plant life, we have introduced the beautiful Devil’s -bit Scabious to be a larval plant for the Marsh Fritillary, a rare butterfly found locally. It really is possible to produce an abundance of food whilst allowing the rest of nature to thrive.

It is partly the plant diversity which fosters a high biodiversity count on organic holdings, including ours. As well as the grass snake which prompted this blog, we have a plethora or bumble and solitary bees which make good use of our wild and cultivated plants. A diversity of plants provides more opportunities for a greater range of butterflies and moths too. But it’s not just the plants which bring greater biodiversity in fauna. It’s a smart attitude to landscape management, it’s a desire to exist with, not despite nature. We have stoats, foxes, wagtails, bats, frogs, toads, goldfinches, blue tits, woodpeckers, jays, grasshoppers, mayflies, damsel flies, the list goes on. And it’s because we never needlessly wage war against anything even if it threatens our productivity. Instead we find ways to co-exist with the rabbits, the slugs, the pheasants, flea beetles and cabbage whites. We trust that they exist for a reason and that they are part of the beautiful dance of life.

Studies have found that 1% of pesticides used actually come into contact with the targeted pest. The rest ends up in the surrounding environment and that means at some point in a water course. Likewise, herbicides and artificial fertilisers are often lost into the soil and eventually pollute our rivers, lakes, ponds and seas. Organic producers don’t participate in this madness. Instead we use natural pest control and apply natural sources of fertility wisely. We also reduce the pollution of waterways by increasing the water-holding capacity of soils. So there is less likelihood of run-off, erosion and the contamination of water with organic production.

We’re taking this a step further by planting perennials such as fruit trees and bushes as part of our market garden. These plants hold the water better in extreme rainfall events (which are much more extreme and much more common these days) reducing flood risk, preventing erosion and the loss of fertility to water courses. As well as this we intend on creating some good sized natural ponds to foster aquatic diversity and help us clean water on our site. We’ll keep you in the loop on progress on these.

7 – Small is Beautiful and Efficient

A recent study by the Landworkers Alliance found that small organic growers are more efficient in growing many crops than their non-organic large scale counterparts. Organic farms tend to be smaller than non-organic ones. Perhaps this is because we understand that there is no substitute to paying attention to detail, to observing nature closely so we can work with it not against it. Whatever the reason, our small organic holdings are diverse and efficient places of productivity. It wasn’t so long ago that all large villages and every town had one or more market garden on its outskirts to serve the people of that place. It’s no coincidence that organic producers are working at more sustainable scales with a drive to sell locally and connect people with where there food comes from.

We are an innovative lot. Perhaps because our primary motivation is not pure profit, yes we want to earn a living but the driving force is to make the world a better place. We are innovating ways to improve productivity whilst increasing biodiversity, creating methods of locking more carbon in soils, discovering natural ways to prevent the outbreak of pests and disease. And on top of that organic growers are often those pioneering new methods of being able to sell locally, of connecting people with where their food comes from.

Here at the Real Food Garden we have Amelia who has pioneered the creation of several Agroforestry projects in the UK, we’re trail-blazing with our veg boxes and we are always seeking new ways to be better at what we do. Unleash us and watch us grow the more beautiful world our hearts know is possible.

If you believe that as a species we should be actively engaged in producing our basic needs then organic is for you. Organic agriculture employs more people than non-organic. We are putting people back into food production. Less than 3% of the UK is involved in food production and we think that’s unwise, unsustainable and undesirable. Our small market garden uses no machinery but does use the muscle, ingenuity, and love of the two of us to produce food for over 20 local families. More people should be involved in producing food so we can shift away from our reliance on fossil fuels and move towards a more sustainable form of existence and we are so pleased to be part of this transformation.

Organic production works with nature so it’s no surprise that organic practices sequester carbon. By increasing the organic matter content in soil, composting, and crop rotation we lock carbon into the soil. We are mitigating climate change. Here at the Real Food Garden we go further than this in several ways. Firstly we are no-dig. That means we don’t plough or turn our soil. Each time soil is ploughed or dug over carbon is released, this is a major cause of climate change. By not disturbing our soil we allow it to build up the carbon content over time, effectively sucking CO2 out of the atmosphere. To increase how much CO2 we are locking up we use biochar. This is charcoal which is charged with nutrients (by putting it in the compost heap) and then added to the beds. Biochar doesn’t decompose, it stays in the soil for thousands of years, holding onto that carbon and helping us feed our crops.

So next time you are biting into one of our flavoursome carrots or cooking up some sweet onions you can be smug in the knowledge that you are eating food that is as good for the world as it is for you. Proper job!